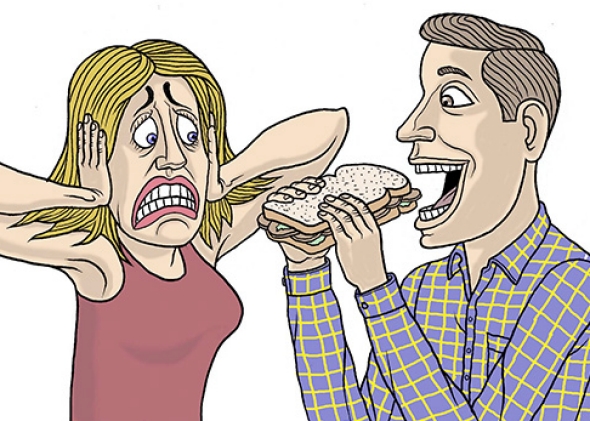 If chewing noises make you unreasonably angry, stop and read this for a second!

Everyone has that one person among there friends or family, or maybe you are that person: someone who simply cannot stand other people’s chewing noises and can get downright aggressive because of it.

Short fuse
Other people’s noises can really grind our gears; nothing is more frustrating than being bothered by noises you don’t produce yourself. Have you ever shared a romantic meal with your partner and you just couldn’t enjoy it because of their chewing noises? In fact, it might even have made you angry at them. We’ve certainly been there! People often think that people who are easily annoyed by other people’s noises just have a short fuse. But nothing could be further from the truth!

Misophonia
Don’t worry: if you really can’t stand other people’s noises, that doesn’t make you a bad or irritated person. It just means that you probably suffer from a disorder called misophonia. People who have this disorder have an extreme sensitivity to noise, and specific sounds in particular. It turns out that people with misophonia can go into a fit of rage if they’re exposed to the sounds they can’t stand. For many people, misophonia is linked to sounds that are produced while eating: chewing, swallowing, slurping… When people with misophonia hear these noises, they can even throw a full on tantrum.